Love it or loathe it, we can’t deny that CCTV is a technology that’s here to stay. Since it’s uptake increased fairly swiftly in the early 1990s, it’s become omnipresent in society with cameras visible everywhere from public buildings to airports, railways, highways, and to homes and businesses. It’s a constant eye on good doers and wrong doers in society and has become invaluable to police forces and security services around the world.

There’s been a gentle shift from a resentment of being watched by ‘big brother’, of being spied on as we go about our business, to acceptance of it presence and an increased feeling of safety. Here are just a few examples of how CCTV technology has integrated with society for the benefit of its citizens. 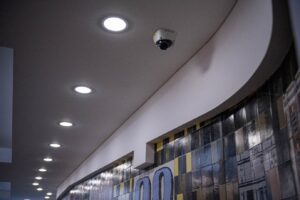 People actually feel safer when there is a CCTV presence, particularly in open spaces like woodland and parks. The knowledge that public areas are being monitored means that early detection of, for example, large crowds gathering without any known purpose can lead to early dispersal and the restoration of safety and calm to the area.

Women especially have, quite rightly, voiced concerns about safety on our streets and shared areas. The combination of CCTV, lights, and remote monitoring is great for offering greater protection for women when they’re out and about – nobody should feel they have to stay inside to be safe.

We’ve all heard it in programmes like Line of Duty when a crime’s been committed, or a suspect has been spotted on the street: “Get me the CCTV footage asap”. Video footage is highly effective in allowing the police to unravel an incident or identify suspects of a crime, especially when high-definition recordings are used in conjunction with facial recognition software. Investigators can use CCTV to playback an entire incident to watch the sequence of events, the route taken by a potential criminal and even follow them through a town or city by using footage from different cameras. CCTV has become an invaluable tool to the police and offers support under an increasingly squeezed budget.

CCTV is a great deterrent for would-be wrong doers. In public places and on private property, the presence of cameras is good for preventing crime. It’s a visible reminder that the premises or area, and the people in or near these areas are under surveillance. Many potential criminals will know that a CCTV system means:

The return on investment from the installation of a CCTV system is significant compared to the clear up of a crime.

Traffic cameras are essentially CCTV cameras and can usually be found mounted on motorway gantries or on the top of traffic signals. The use of CCTV in this capacity is on the increase because of the invaluable service it provides in the detection of traffic violations and in the investigation of road traffic accidents. It also acts provides round-the-clock surveillance of busy roads, motorways and intersections which can be used to help disperse congestion and influence future town planning. Pretty useful technology!

CCTV systems can be used on a macro or a micro level and provide security and protection for the local shop or the town’s major shopping centre. Whatever your business is I would definitely recommend installing cameras, they’re definitely seen now as more ‘best friend’ than ‘big brother’.

Cybersecurity threats 2022 – what you need to know