The evolution of CCTV – from monochrome to technicolour and beyond

The evolution of CCTV – from monochrome to technicolour and beyond

I’m a bit of a history buff when it comes to the Second World War; there’s something about that world event that I’ve always found fascinating. So when I was asked recently where closed-circuit television (or, as we know it better as: CCTV) originated, it wasn’t too much of an effort to quote the name of German engineer Walter Bruch or the year 1942. Bruch developed the technology not for monitoring people, but monitoring weapons – more specifically, the medium- to long-range missile known as the V-2. When the Germans were testing the V-2s, scientists and technicians needed to observe the launch and to monitor the behaviour of the missile from a safe distance so they could make accurate adjustments.

A rise in popularity

CCTV moved from the military to the commercial arena in 1949 when the American company Vericon started advertising the technology. Even then, uptake was slow and there was little interest in the use or development of CCTV until the early 1960s when both London Transport and the police force recognised its benefit in terms of public safety and commissioned the installation of the first cameras. Although having developed from monochrome to colour in the 1950s these early cameras certainly weren’t what we’re used to today. The pictures were fairly grainy, the function pretty poor and the systems were based on real-time monitoring using magnetic tapes to record footage: labour intensive and expensive to say the least!

One of the most significant developments in CCTV technology was the videocassette recorder (VCR) which was introduced in the 1970s. It was quite the revolution for businesses who quickly saw how they could use the cameras to protect their premises and assets. The VCR got rid of the requirement for screens to be monitored in real-time and instead brought in the ability to record activity on a tape: a case of ‘set and forget’ – until the tape needed changing that is! The real benefit was being able to review the footage as and when required rather than – as a decade before – missing the action when it was tea break time.

It wasn’t until the 1990s that we saw the next important change in technology. Enter the multiplexer! Instead of having each camera on site connected to its own monitor, the multiplexer allowed all camera images to merge into one, so only one monitor was needed and there was just one recording of all cameras all of the time. The multiplexer recorded each camera for a set amount of time, for example, 10 cameras on site with each camera recorded for one-tenth of a second on a continuous loop. Recording capacity grew considerably thanks to this technology. 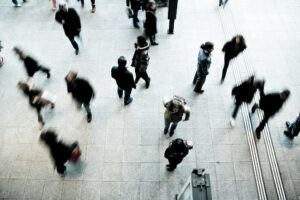 Since the 1990s CCTV has gradually become smarter. We now have technology that allows remote operation, ultra-high-definition images, and facial recognition across the many thousands of cameras that are installed in commercial and private premises, and in our towns, cities, and open spaces. We’ve gone from wired to digitally networked systems and the technology continues to evolve.

We rely on them to deter criminals and prevent crime but also to quickly find and apprehend a criminal if a crime does take place. We’ve become used to CCTV being integral in the fight against terrorism, but it’s only recently through the coronavirus pandemic that we’ve become aware of how the technology can be used. Did you know that CCTV is helping with:

CCTV is a fascinating technology that will only continue to become more widespread as we accept the benefits it can bring to society. If you’re interested in finding our more about how your business could benefit from an integrated CCTV system, give us a call.