Ever wondered what’s behind the lens of CCTV?

Ever wondered what’s behind the lens of CCTV?

CCTV can often look a bit mysterious positioned high up on a building or gantry, sitting watchful of its surroundings. People can be wary of them, often feeling a sense of intrusion when what they should be feeling is a sense of safety. The technology has advanced incredibly over the last decade and we’re relying more and more on the images CCTV provides us. But have you ever wondered how they work?

For the tech-geeks among us here’s what happens.

Time for the technology

It starts with a networked IP digital camera that houses a lens and image chip which captures lights and decodes them to form a picture. As part of a Zicam CCTV system, all cameras are linked by network cable and sit on an independent network infrastructure. The main benefit of this is its scalability, because once the network backbone is in place and installed around the business premises, it’s possible to add any number of cameras anywhere on the system.

All recorders are now server based and work in the same way a PC would, by capturing all CCTV footage that’s been recorded. It’s search function is intuitive and easy with many of the high-end systems including person detection so the user isn’t scrolling through hours of recordings to look for a particular person. Instead, a description of the person and specific timeframe are input as the search criteria, then the system conducts a pixel search that will bring up thumbnails of the described person wherever they appear on site within that timeframe.

One of Zicam’s biggest rollouts that included this technology was for a large shopping centre in the West Midlands where they use it to search for missing people. Say (every parent’s nightmare) a  little girl wanders off on her own and goes missing, the centre’s security team can use description and timeframe to track exactly where she’s been and the last point where she was seen so she’s reunited with her parents very quickly. This is also great for concerts, stadiums, and arenas as well. 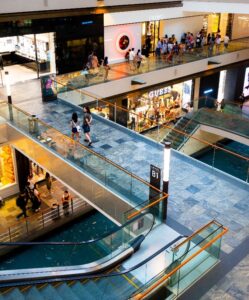 What happens next? Sounding the alarm.

Going back to our business premises. Next, cameras are set up to protect the perimeter of the site. Detection lines (aka analytical trip lines or zones of interest) are programmed in the sterile section – or the internal perimeter of the site – so as soon as someone enters one of these digital zones an alarm is triggered at the receiving centre. The operator at the centre will raise an audio challenge using the integrated loudspeaker system and if it’s not met and the person remains on site the operator will then issue a police response.

We’ve had some great success stories with this system, where in just a few minutes following an audio challenge the police have arrived on site and caught the intruder red-handed, often before any damage has occurred.

These systems include ‘deep learning, patterned-based algorithms’ where, from day one, they start to learn direction of footfall, what directions vehicles travel around site, light levels, and what something moving around site actually it. For example, if a fox repeatedly visited the site, the system would learn by its height, the way it moves, where it enters that it is a fox and not a human intruder. After 4-6 weeks, when the self-learning period is complete, a technician will dial in to check that what it’s learnt is correct. Correct learning means no inconvenient, middle-of-the-night false alarms.

What are the future trends for CCTV?

Obviously, the coronavirus pandemic has influenced CCTV. In a recent software update, a CCTV system will now alert on whether a person is wearing face mask, how close together people are, and how many people there are in a group.

One of biggest current trends is the installation of cameras on gantries on motorways and major ‘A’ roads, which will monitor drivers who are on the phone, eating, or throwing litter from their vehicles.

Whatever trends emerge, CCTV is here to stay. I believe that in the next 3-5 years we will see a huge influx of CCTV in more locations because it’s so effective – in a lot of areas it’s already supporting the police force as its eyes and ears. Whatever your thoughts, at least now you know how it works.

If you want to find out more about how CCTV can protect your system, call us today and we’ll be happy to help.